Representatives of Academic Technology, the Department of Anthropology, and Cambridge startup Archimedes Digital spoke to a capacity crowd at HUBweek 2017, presenting on the use of digital methods in the most recent season of the Harvard Yard Archaeology Project (HYAP).

HUBweek was founded in 2014 by the Boston Globe, Harvard, MIT, and Massachusetts General Hospital. Billed as "a festival for the future," it is "a first-of-its-kind civic collaboration and weeklong festival that brings together the most creative and inventive minds making an impact in art, science and technology."

The HYAP event highlighted the project's history and importance to Harvard and the local community and showcased some of the digital tools used in the Fall 2016 field season, which was part of the Harvard College course "Archaeology of Harvard Yard," offered by the Department of Anthropology and taught by Peabody Museum curators Diana Loren and Patricia Capone. The presentation covered the process of cataloguing finds and publishing student-created "object biographies" in an Omeka online exhibition site, and served as the public debut of the latest development version of an interactive augmented reality (AR) application developed for HYAP and the Peabody Museum. 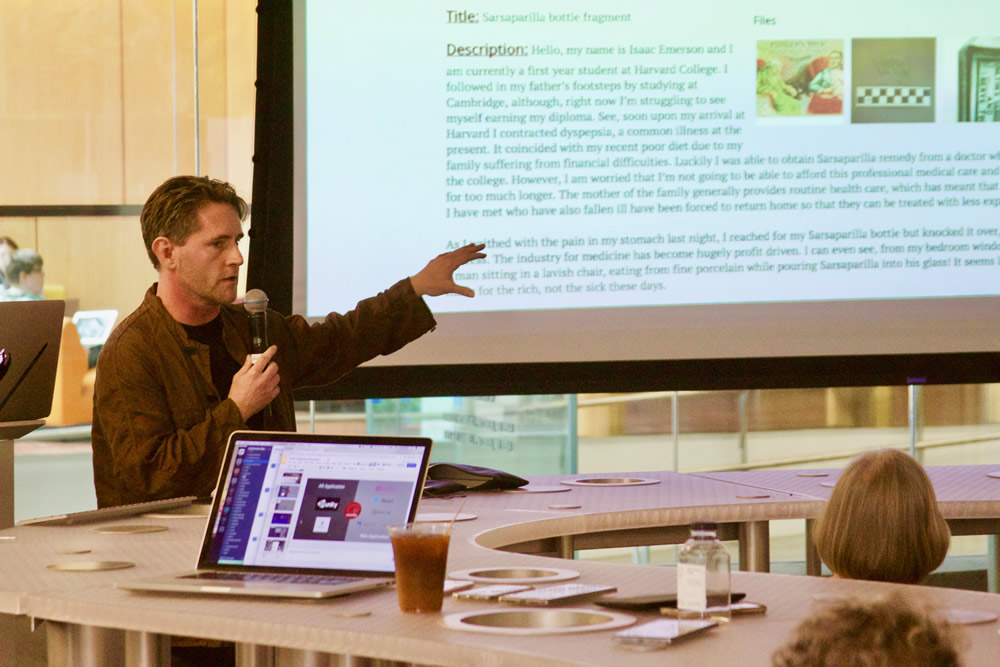 Brandon Bentley, senior instructional technologist with Academic Technology for FAS, explains the use of Omeka as an exhibit tool and as a source of data for the HYAP augmented reality application

Presenters included Jeff Emanuel and Brandon Bentley from Academic Technology for FAS; Alexis Hartford, a PhD candidate in archaeology; and Luke Hollis, president of Archimedes Digital, a small business that specializes in cultural heritage and digital humanities innovation. The sold-out event began at the Discovery Bar in Harvard's newly-renovated Cabot Science Library and concluded out in the sunshine of Harvard Yard, where attendees were able to use smartphones and tablets to digitally recreate the trenches from the Fall 2016 HYAP excavations and learn more about the objects that were found in the most recent field season. 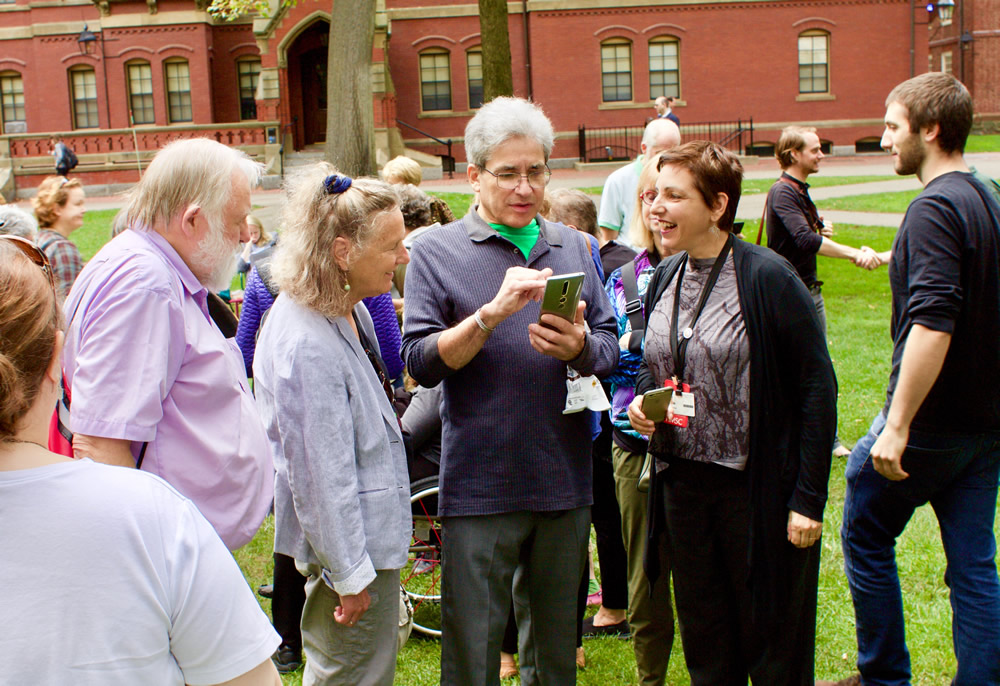 Faith Sutter (front right), communications coordinator for Harvard Museums of Science and Culture, looks on while attendees try out the HYAP Augmented Reality application at the site of last Fall's excavations

The HYAP augmented reality application combines geolocation with 3D photogrammetric models to digitally superimpose the excavation trenches onto their proper location in Harvard Yard, and pulls in object images and metadata from the Omeka site to provide users with information about individual finds.

The response from attendees was overwhelmingly positive, with several staying past the official end of the session to ask further questions and to spend more hands-on time with the app. "This is amazing!" said one attendee, who identified herself as member of Harvard's class of '61. "It's wonderful to be able to learn more about the people who were here before us, while surrounded by the people who came after!" Another attendee, who was visiting from Oxford, said learning about HYAP and experiencing the connection with the excavation and its finds that the AR application helped facilitate gave him a greater appreciation for the history beneath his feet, both at Harvard and at home. "My house was built in the 17th century," he said. "You can bet I'll be looking more closely in the ground there from now on!"

"It's all about telling a story in a way that allows people to make meaningful contact with the subject matter," said Jeff Emanuel, associate director of academic technology and an archaeologist. "Whether it's archaeology, cultural history writ large, or any other field, the more tangible we can make the subject, the more interest and access people will have." 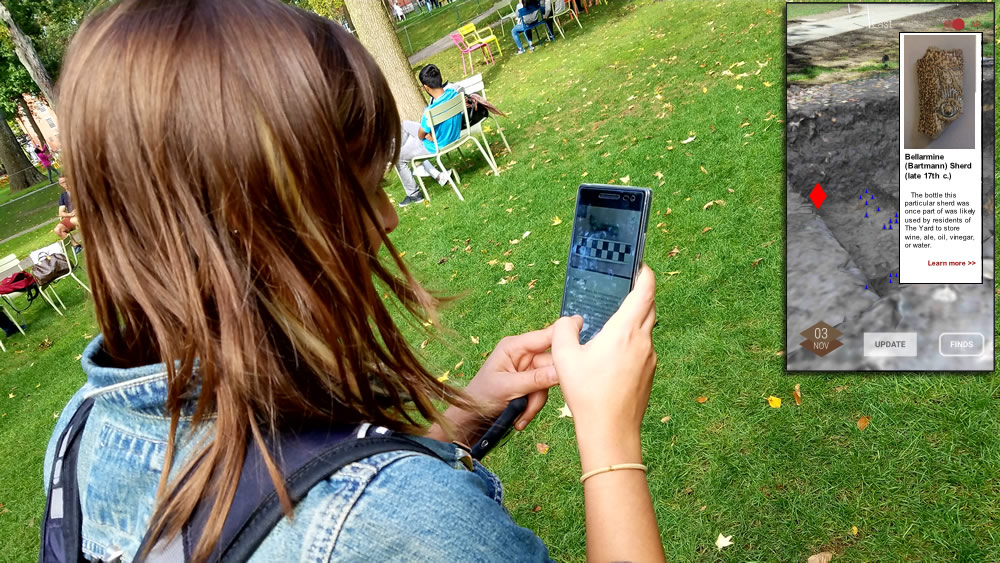 Alexis Hartford, PhD candidate in archaeology and digital teaching fellow for the Archaeology of Harvard Yard course, explores the excavation site using the HYAP Augmented Reality application. Inset: An image of a find and portion of an object biography from the HYAP Omeka site are presented in the AR app alongside a 3D rendering of that phase of the excavation trench.

In addition to public engagement, HYAP helps provide answers, and open up further research questions, about Harvard's early history. The Archaeology of Harvard Yard course was supported by the Digital Teaching Fellow program and a working group focused on digital scholarship support, which includes representatives of Academic Technology, the digital history program, and the Harvard Library.

If you have questions or are interested in more information on HYAP, Omeka, or other uses of technology in teaching, learning, and research, please contact Academic Technology for FAS at atg@fas.harvard.edu.

Tell us about a tool you use

How do you use technology to enhance your courses? Tell us, and we will add it to the website.